This half term we are learning about Surprising Sharks. We were initially a bit scared of them, but found out that sharks kill only 6 humans per year, compared to 100 million sharks killed by humans each year!

We have learnt that sharks have a dorsal fin, a pectoral fin, gill slits and they have a super senses and can sense their prey “crackling!”

We took part in a maths-focused Dream Believe Achieve Day at school. We were lucky enough to be visited by a baker and a gardener who told us how they used maths in their job. We then got stuck into decorating buns by following a recipe, and planting seeds in the outdoor area. What an inspiring day!

Children with 100% attendance were treated to a game of “kidditch” which was very similar to Quidditch as played in the Harry Potter films, at the end of the Summer 1 term.
The children were split into 4 teams; Gryffindor, Slytherin, Hufflepuff and Ravenclaw and wore different coloured vests with the names of characters from the film on them. They were taught how to run with a broomstick, how to score points with the “quaffles”, how to get opponents out with “bludgers” and how to win the game by getting the “golden snitch”. They were given positions such as “chasers”, “seekers” and “beaters”. All the children listened well to the instructions, understood them and were able to play the game. It was so much fun! All the children put in 100% effort and absolutely loved playing! They didn’t want to stop!
On returning to school, the children were so inspired that they made broomsticks and taught the other children how to play!

We had fun learning about worms in Reception! At first we thought they were slimy and yucky, but as we read our book and found out more facts, we learnt what amazing minibeasts they are! We made wormeries, dug for worms, held them and also had a visit from a Wormologist.

I Will Not Ever Never Eat A Tomato!

This half term our Power Of Reading book has been “I Will Not Ever Never Eat A Tomato” by Lauren Child and we have been exploring foods which we don’t like very much and giving them a try! We have tasted food, felt food, squeezed food, drawn food, role played in our very own cafe, written about our least favourite foods, made bar graphs and written persuasive letters. Here are some pictures of what we’ve been doing.

Yesterday, we had a visit from the Road Safety Team. We listened to a story about how to walk to school safely with our grown ups. We learnt to:

After the story we learnt a song and all received a book to take home and share with our families and a sticker!

Trip To The Cafe

Last week we visited a cafe to support our learning about food. We walked in pairs and chatted along the way about where we lived and the different landmarks we saw. The children showed an understanding of keeping safe by always holding their partner’s hand, listening to their teacher’s instructions and stopping at roads and waiting until their teacher said it was safe to cross. All the children knew at the crossing the red man meant stop and the green man meant go!  At the cafe we ordered a drink and a bun from our waiter, Stuart. The waiter then brought our order over and after that, gave us the bill.  We learnt new vocabulary, including; waiter, chef, receipt and order.

We have been exploring all the different ways to make 5 by arranging toppings for pancakes. We had a pot of strawberries and a pot of bananas and were able to choose a total of 5, in any combination. Our next challenge was to draw it and after that, make it with real strawberries and bananas. The children were able to read their maths drawings and correctly add the toppings they had drawn. Yummy! They were delicious!

World Book Day: Shh! We Have A Plan

Today we celebrated Workd Book Day in Reception. We all dressed in blue, just like the characters in our World Book Day book; Shh! We Have A Plan,by Chris Haughton. One child dressed in very colourful clothes, just like the beautiful birds in the story. We made binoculars and took them outside to go bird watching, we collaborated to make a bird collage, we investigated brightly coloured feathers and finger-painted our own individual birds.

The learners in Reception have been reading the story “The Runaway Chapati”. In the story a girl makes a Chapati and it jumps up out of the pan and runs away from her and her friends saying “run, run as fast as you can, you can’t put me in your frying pan!” We decided to role play the story in our classroom using props, headbands and our jungle role play. Our learners stretched their making links muscle and thought that it was very similar to a well-known traditional tale. Can you guess which one?

How To Make A Chapati

To start our new story topic, “The Runaway Chapati” we learnt how to make chapatis. We looked at ingredients that we needed and watched a demonstration by an expert. Later, each child had the opportunity to make and eat their own chapati. There was only one problem, Miss Lister’s jumped up out of the pan and ran away! We’re not sure where it ended up!

During Spring 1 our topic was Blue Penguin by Peter Horacek. We explored what it was like in the polar regions and what animals lived there. We developed our own polar landscape artwork which became the backdrop to our own penguin colony. The learners in Reception chose to make their own penguins in a variety of different colours to emphasise that it didn’t matter what colour they were, they were all still penguins.

Children in Reception were rewarded for their fantastic attendance last half term with the 100% attendance treat. The treat was to learn a dance to Chinese music. They listened well and followed the instructions to produce a beautiful Chinese dance.

Today we visited Santa’s grotto in the Kirkgate Centre in Bradford. The children were able to manage the walk to the grotto in town and back holding their partner’s hand making sure they kept themselves safe when walking alongside busy roads and stopping at curb sides and listening to the instructions for when to cross roads safely. They had lots of fun meeting Santa, his reindeer and helpers and even received a Christmas chocolate.

We were visited by a vet, a nurse and a dentist on Dream, Believe, Achieve day. They told us some interesting facts about their job, and let us handle some some of their equipment. What a way to be inspired for our future jobs!

Yesterday we were lucky to have some special visitors in school. Fire fighters! They showed us their engine and we all had a go at using the hose. We sprayed water high up into the air and all over the playground. Just before the firefighters left, they turned on the blue flashing lights and sounded the siren and the horn. What a loud sound!

3 mysterious, gigantic eggs and lots of smaller eggs appeared in our school library last week. We were all intrigued by them and eager to find out more! We took a smaller egg back to the classroom, put it in water and watched it hatch into our very own class dinosaur! A week later, one of the giant eggs hatched! Out came Jam, a T Rex. We went to meet him in the hall where he tried to eat one of the teachers!

Later, back in the classroom, each child was given a Dinosaur Passport and challenged to carry out all of the dinosaur activities in the classroom. Once each activity was completed, they got their passport stamped. We made clay dinosaurs, wrote dinosaur poetry, dug for dinosaur bones, played with small world dinosaurs and sketched a dinosaur bone. What a busy day!

Today, Reception and Nursery held their annual bonfire party. We talked about the dangers of bonfires and fireworks and the children knew they should stand back, away from the bonfire, and they should never touch a firework or sparkler. We remembered the story of Guy Fawkes, about how he plotted to kill the king, and put him on the bonfire! Our senses were well and truly switched on as we smelt the smokey bonfire, listened to the crackles, pops and bangs saw the beautiful rainbow colours and tasted the melted marshmallows. 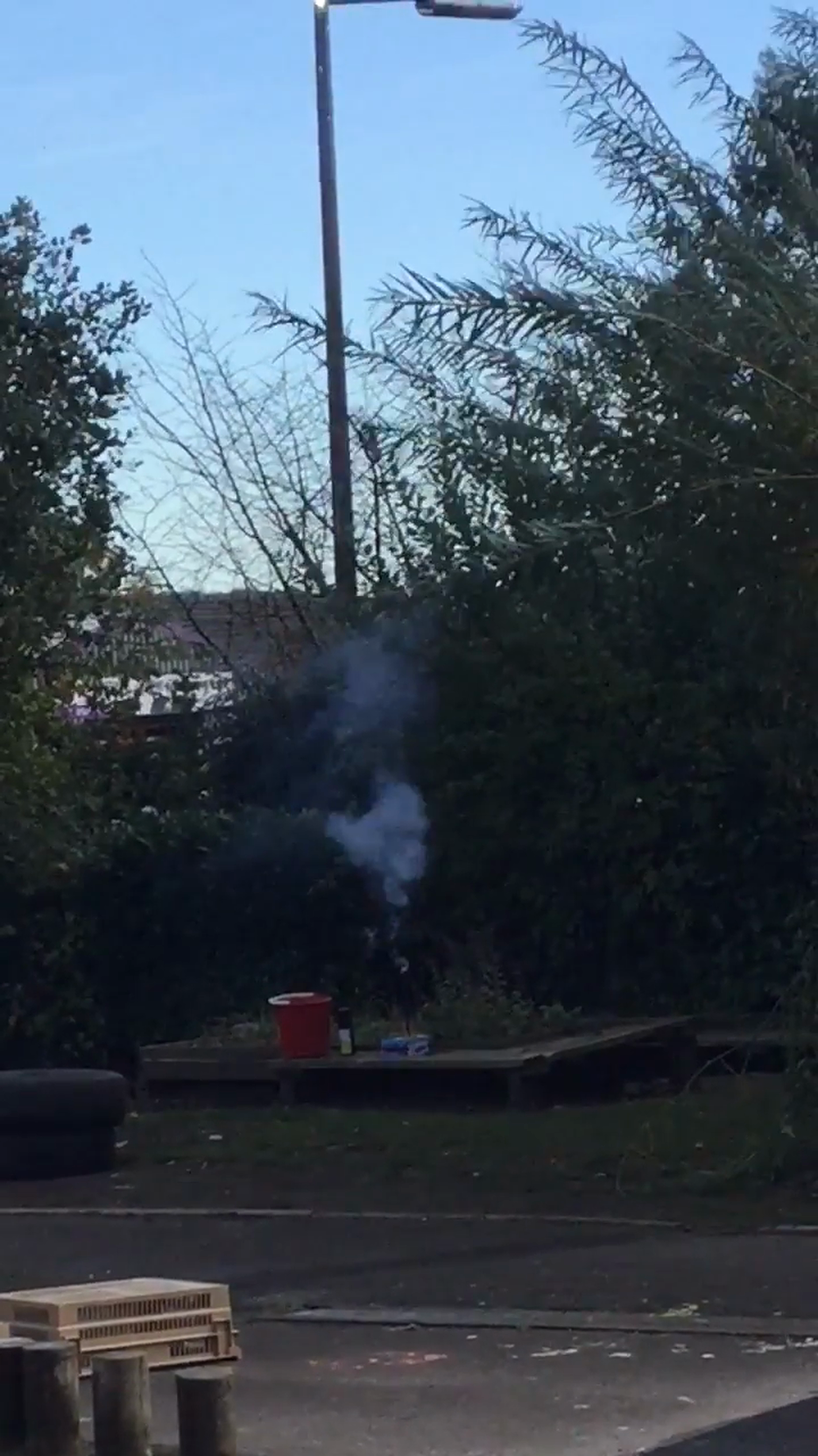 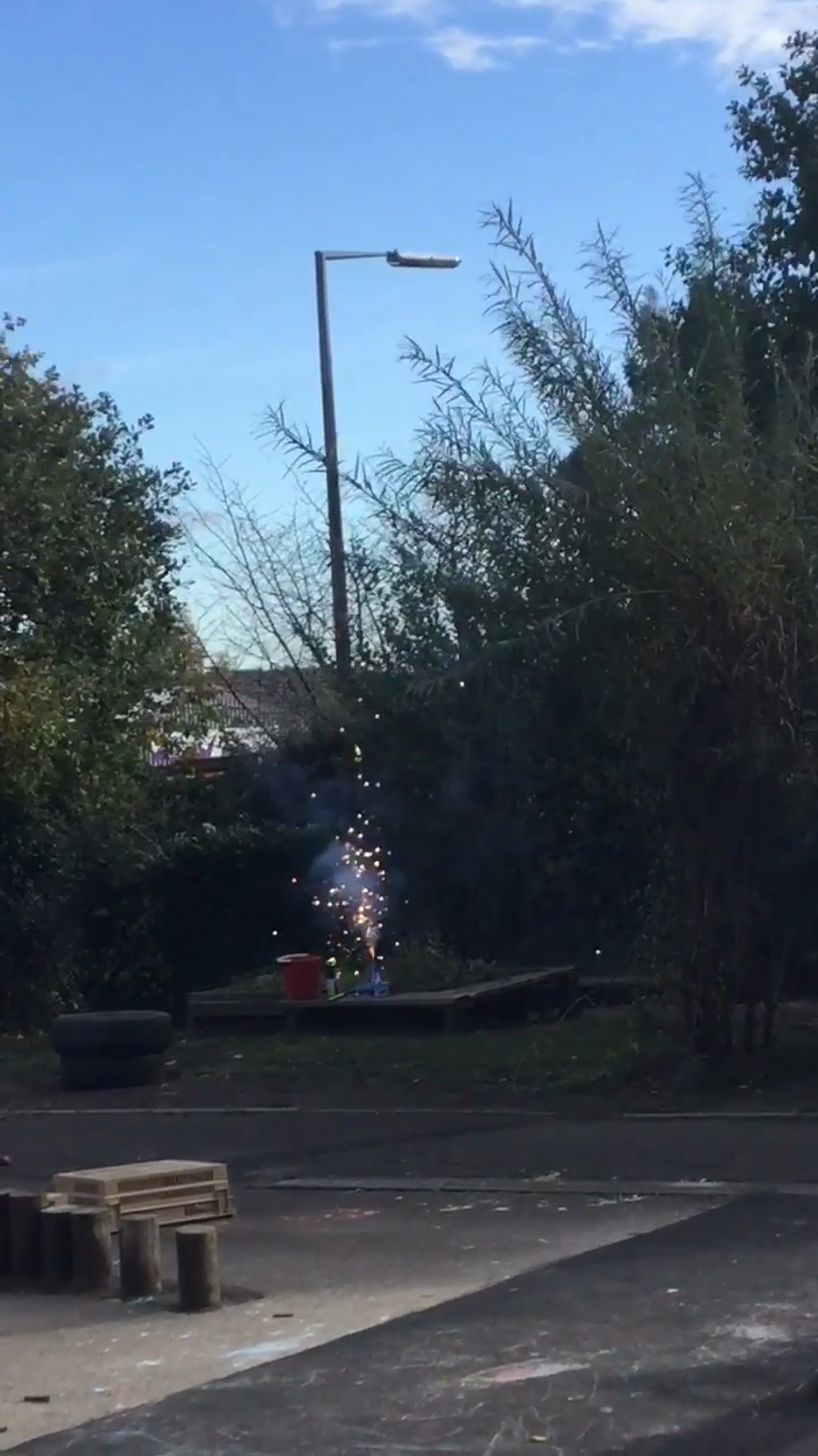 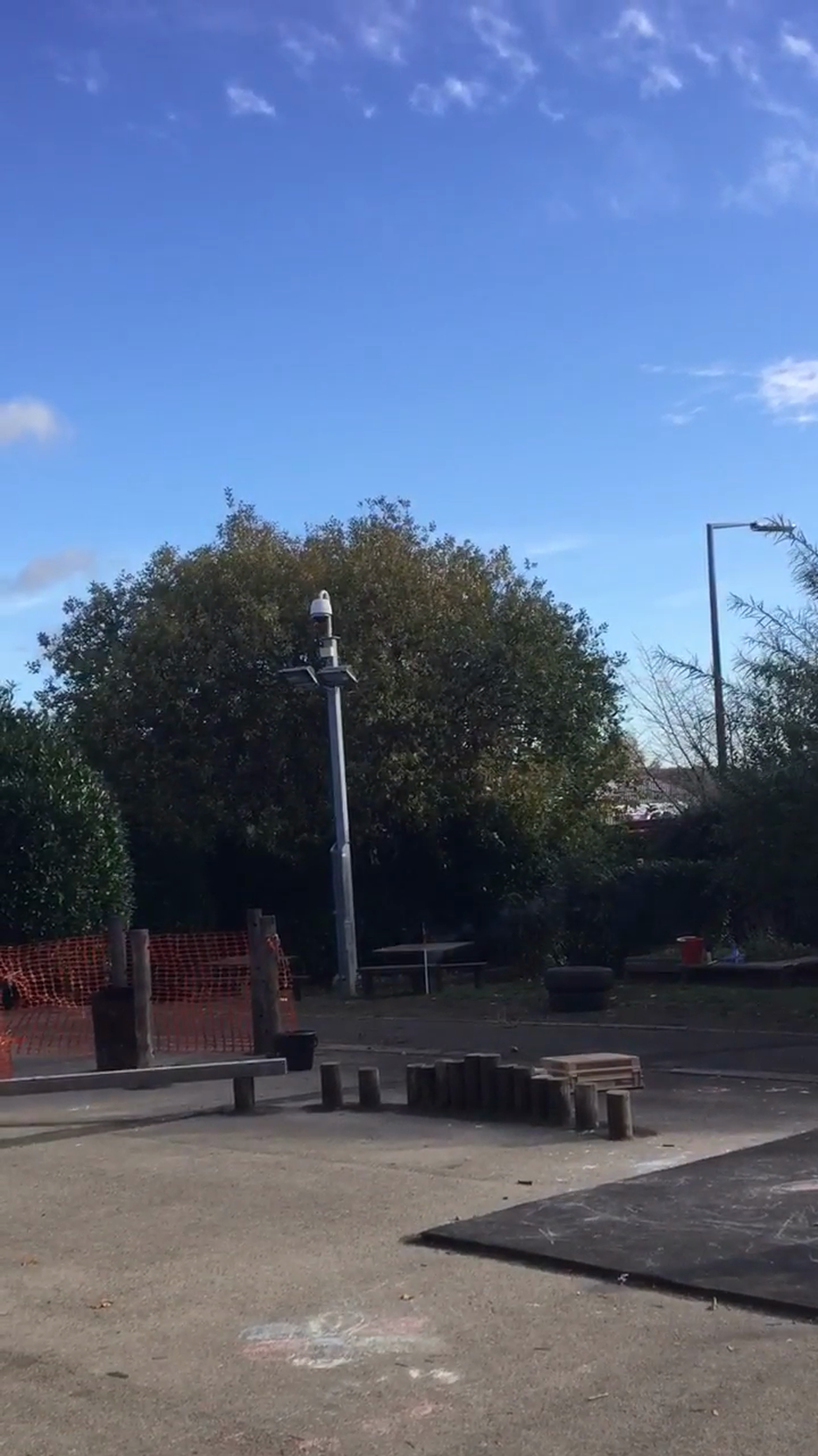 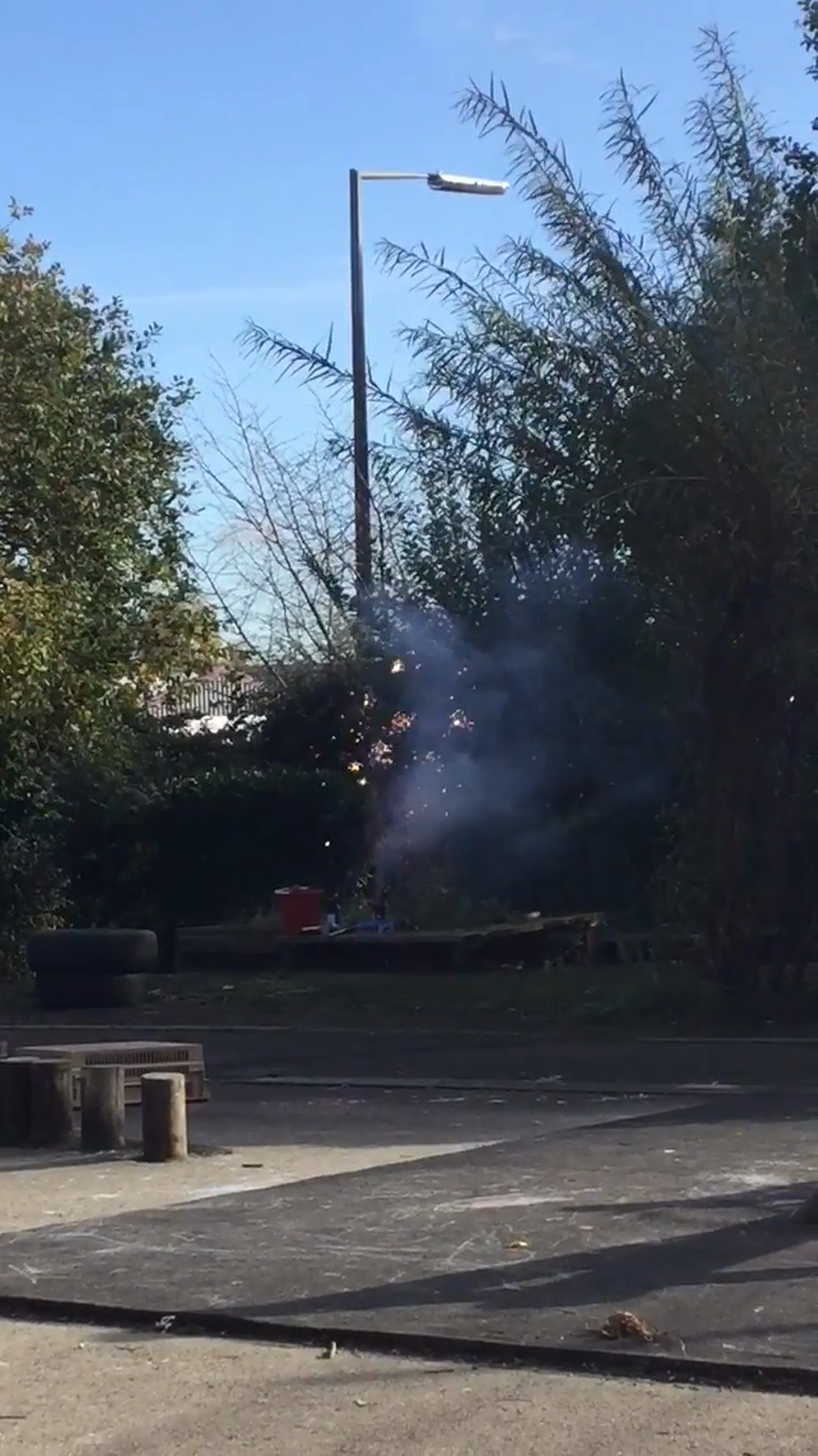