Science in The Den

Yesterday (26.03.19), we went to The Den and investigated 'What was the most popular mini-beast in The Den?' We used a branching database to find out what mini-beast it was then a tally to record our findings!

On Monday (25.03.19), Year 1 and 2 went to a road safety talk. We learnt that we should ALWAYS hold hands with an adult while walking on the path, stop when we want to cross the road next look, listen then move our feet to cross the road.

Stop, Look, Listen - Before you move your feet!

Today (18.03.19), Year 2 went to Tropical World to look at all the different animals and insects. In our curriculum and Literacy topics about bugs, we have been looking at animals habitats, diets and their life cycles. So when we got to Tropical World we were already experts and could explain great deals of knowledge about moths and butterflies. Everyone was very impressed!

Check out our time at Tropical World below!

Watch out animals about!

World Book Day - Shh! We Have a Plan!

In Hughes,  we have been exploring the book Shh! We Have a Plan by the author and illustrator Chris Haughton. We enjoyed reading and listening to the story about trying to capture a tropical bird. Then we used our imagining muscle to creature our very own tropical bird.

I think Year 2 did a great job! What do you think?

Browne Class with their flock of tropical birds 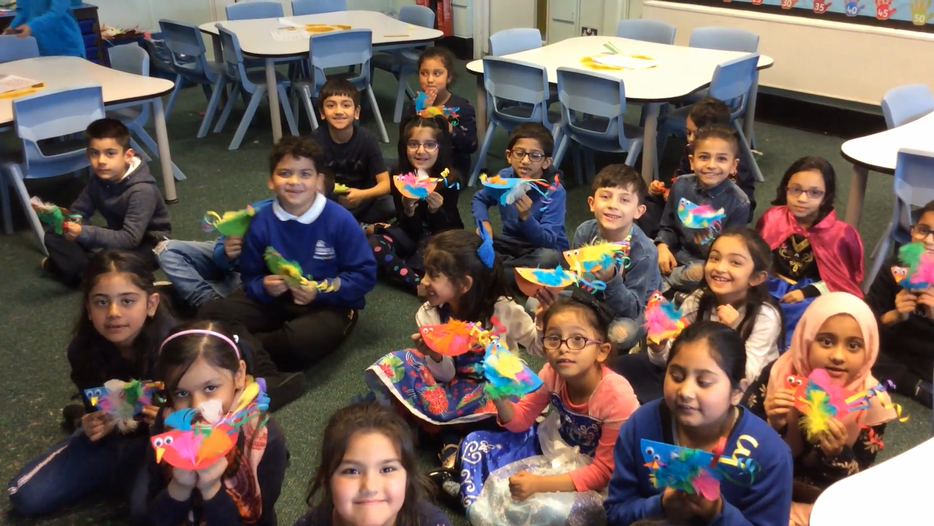 Shh! We Have a Plan by Chris Haughton

This morning (12.02.19), Year 2 created their own stop gap animation based on the Story of Rapunzel. We used Zu3D to record our film.

Check out some of our films below! 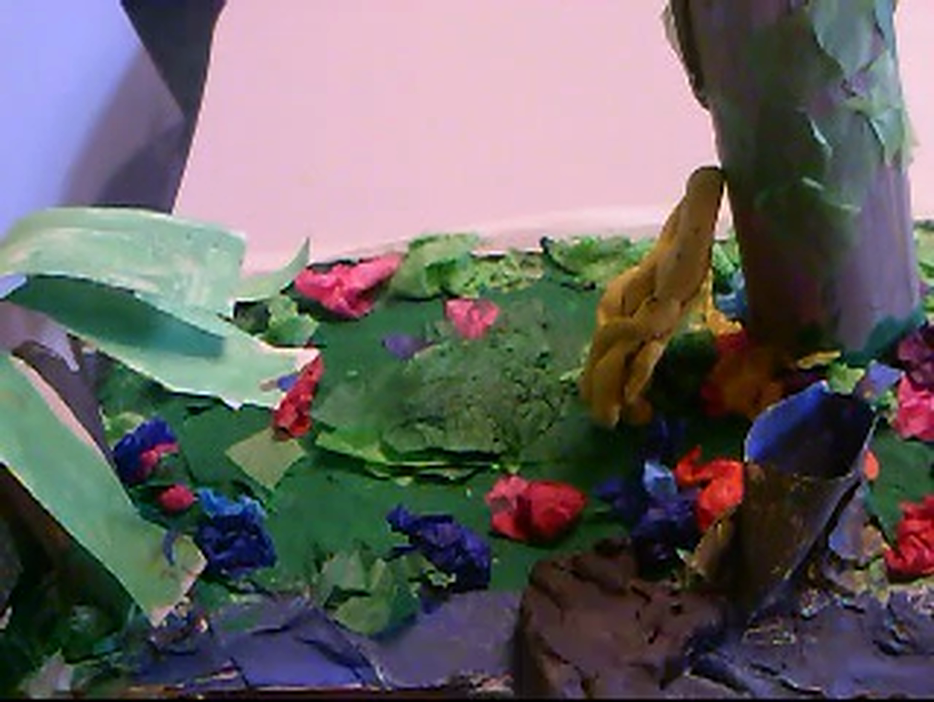 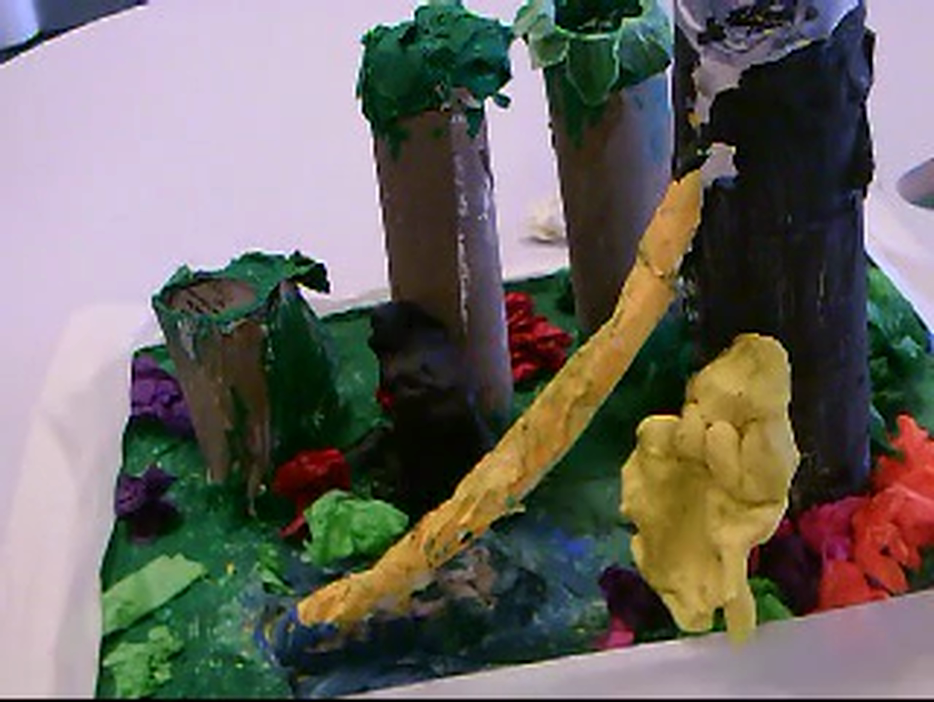 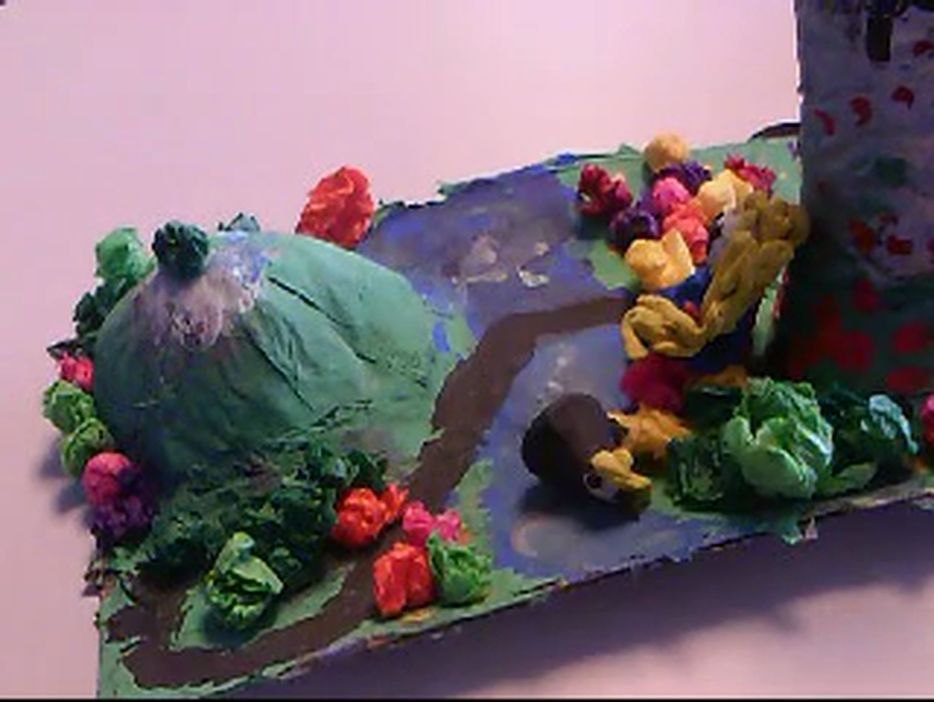 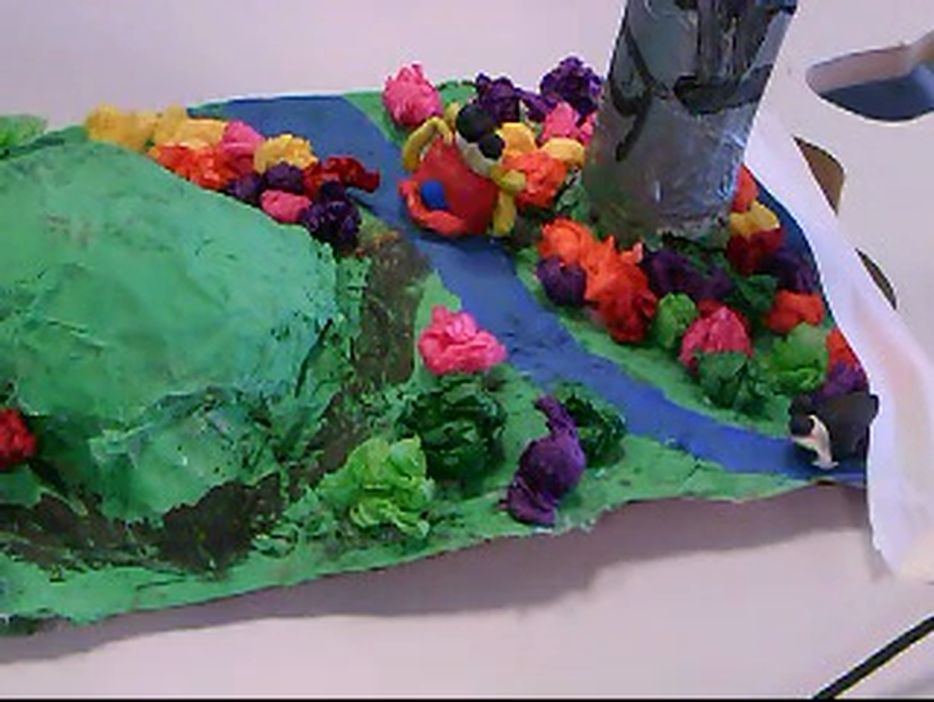 Animation in The Den

Today (12.02.19), we went to The Den with Mr Green. We used our making links muscle to think about what a stop gap animation was. We when created an animation of a centipede.

Stop Gap Animation in The Den 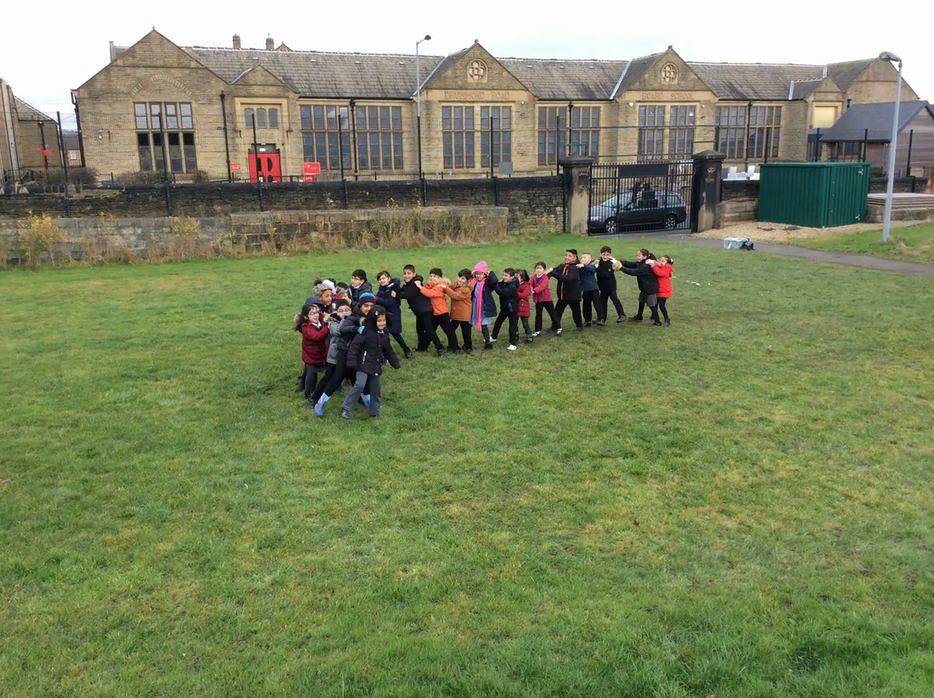 In curriculum, we made our own Rapunzel set to film an animation like Walt Disney. We created a story map and designed our sets. We then worked hard to build, papier mache and paint our sets.

I think we did a great job! What do you think?

In literacy, we are reading the story of Rapunzel. In the story there is a wicked witch who cases terrible curses. We used our imagining muscle to become a witch. We even made our own witches spells and potions.

We had great fun! 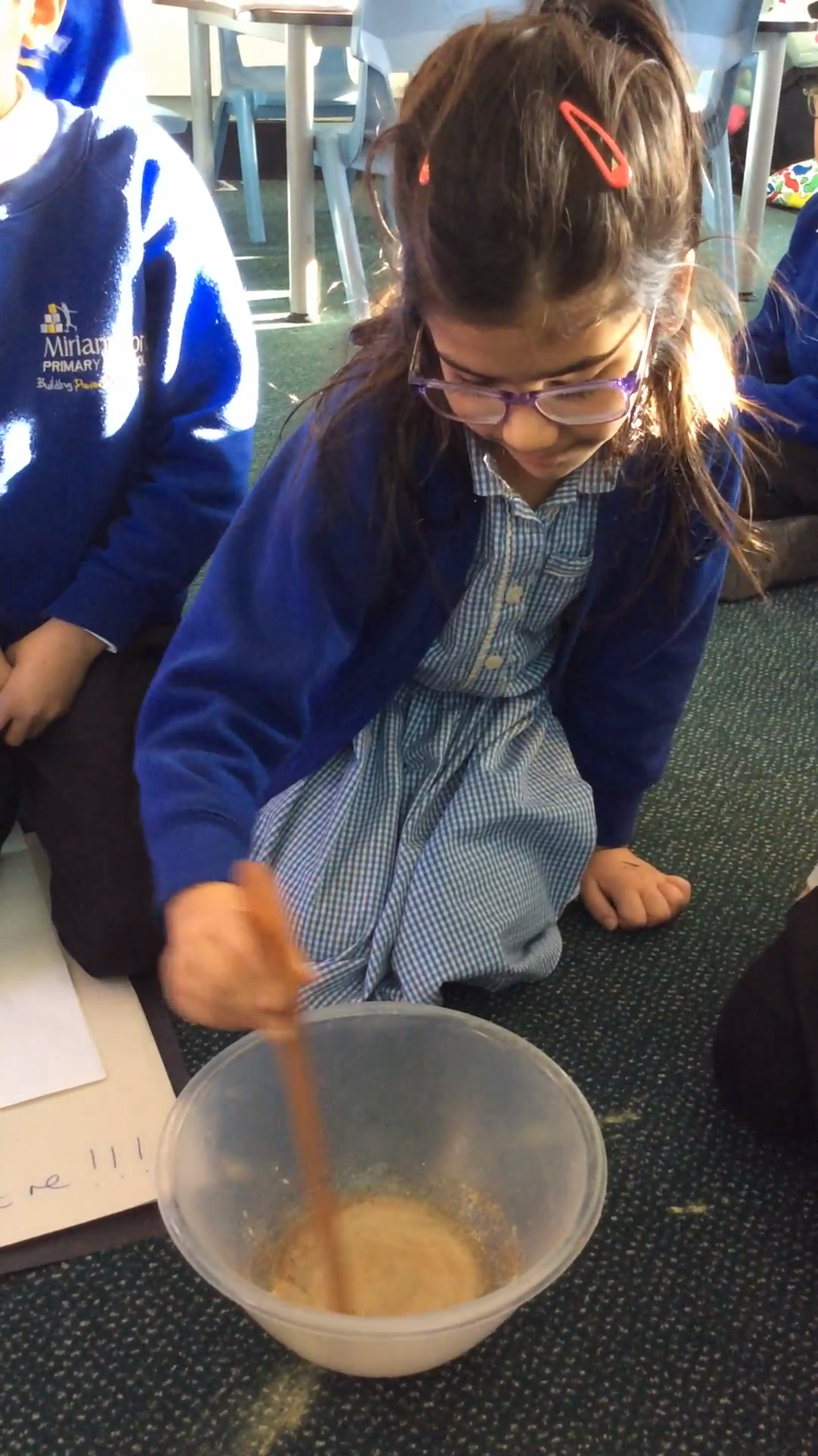 In January, Miss Deciacco and Miss Batool met the author Bethan Woollvin at a Power of Reading Training course. They were very excited because it was the book that we were doing in Year 2. She was very interesting and told us lots about how she wrote her book. She even signed our books for class.

Check out the pictures below!

A DINOSAUR CAME TO SCHOOL!

Today (15.11.18), something incredible happened... a dinosaur came into school. As you know, last week three giant eggs appeared in the school library and no one knew where they had come from. But this morning when we arrive at school one of the eggs had cracked open! Then we were taken to the school hall and we met a T-Rex - the kind of the dinosaurs - it was so excited, but a bit scary too. Next, we went back to our class rooms and wrote about meeting a dinosaur. In the afternoon, we made dinosaur fossils using modelling straws. We had a fantastic day!

Would you be scared meeting a dinosaur? 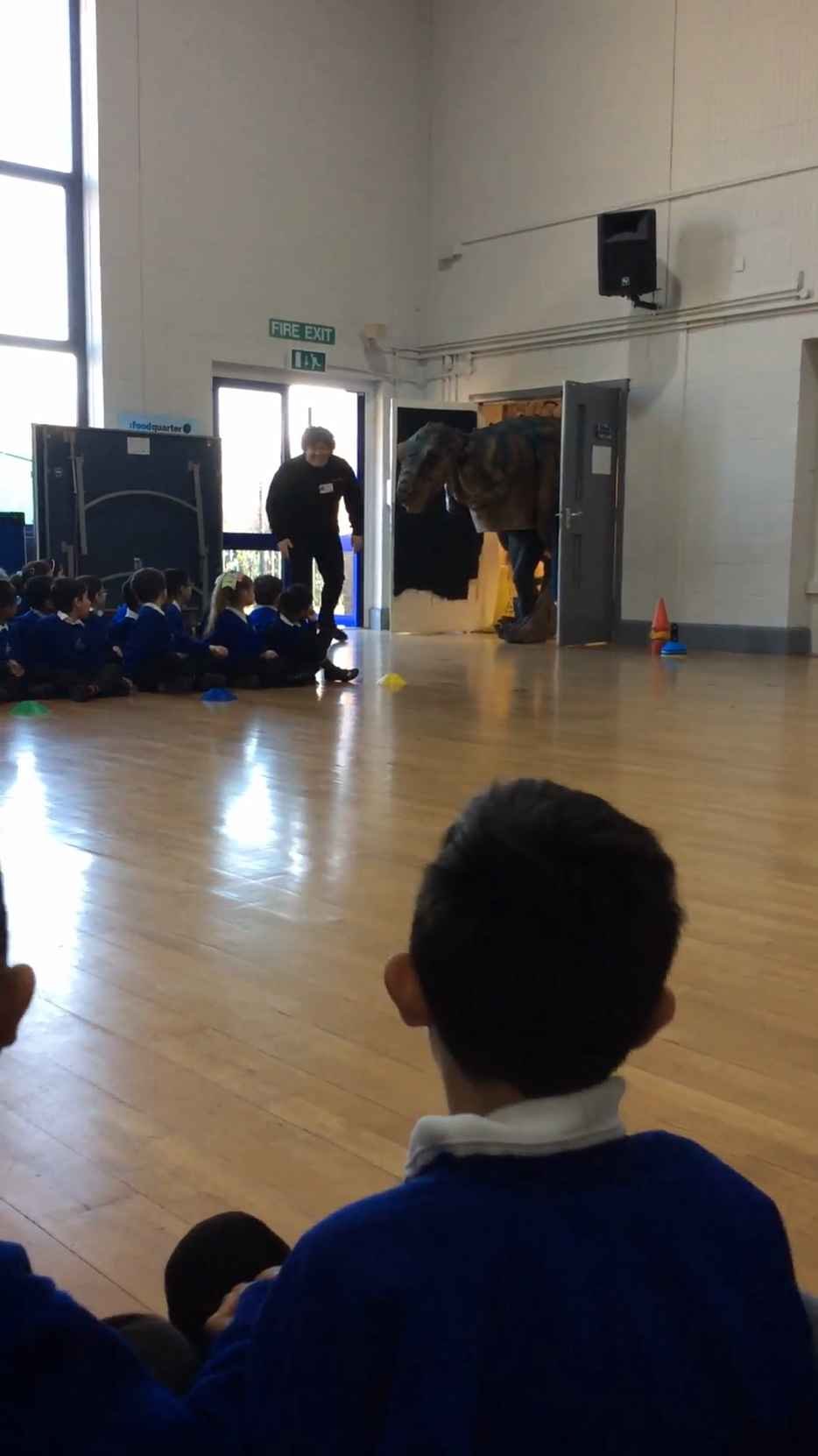 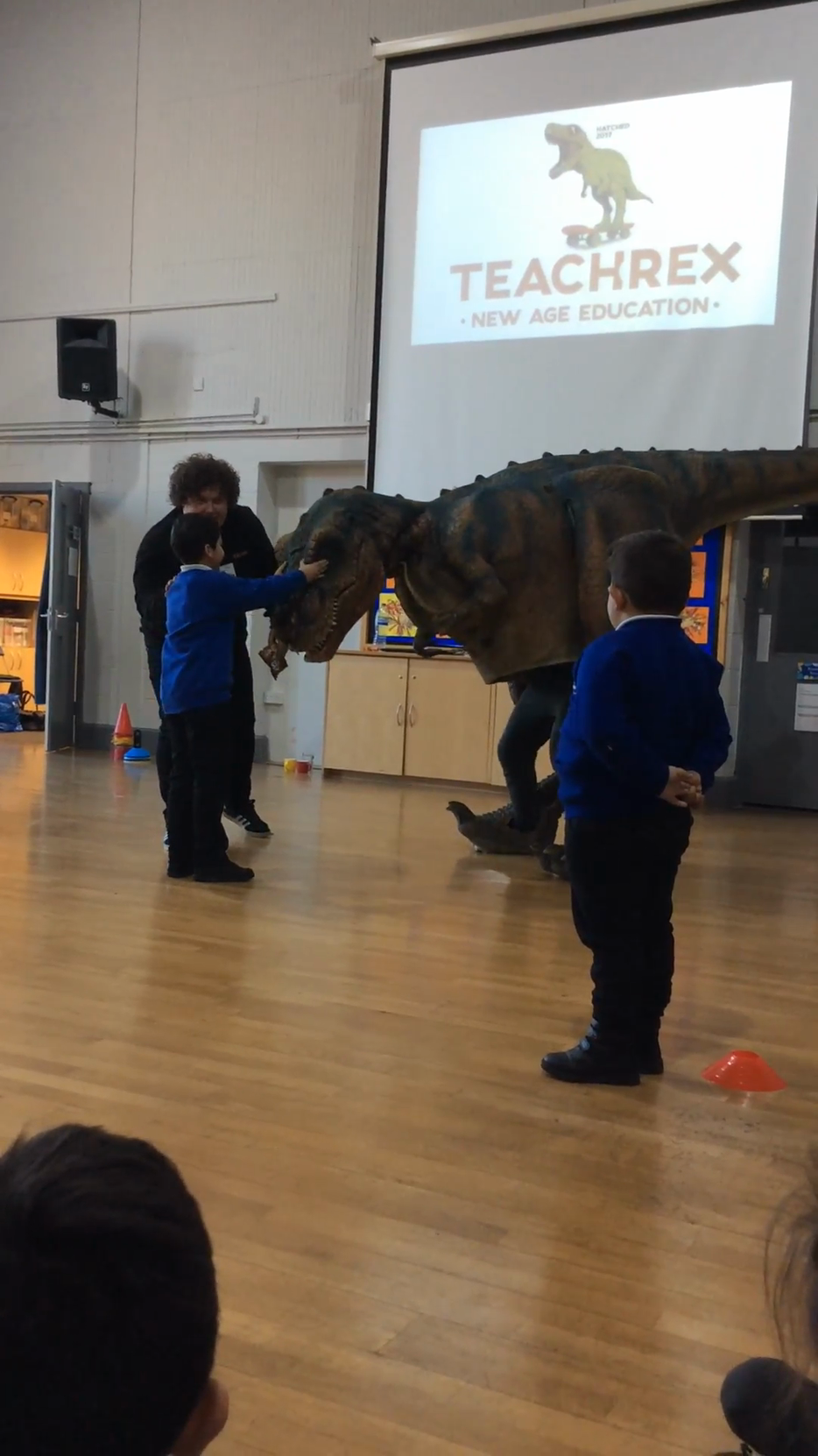 In Year 2 this half term (Autumn 2), we have been looking at different ways to imitate fire and one of the way we are going to do that is to dance like fireworks! We chose the song Firework by Katy Perry and look for inspiration dances to help us come up with a new routine. We have loved learning the song and the dance.

Why not practice our firework dance at home!

Some BIG is coming...

This morning (07.11.18), something arrived in the library. It was three giant eggs. We used our noticing and reasoning muscle to make some predictions. We thought it could be a giant chicken, a dragon or a dinosaur because of the size of the eggs and the giant footprints. We all had to be very quiet to ensure we didn't disturb what was inside. However, we did notice there were lots of smaller eggs around the nest so she stole one to look after in our classrooms. We can't wait to see what's inside!

What do you think is inside the giant eggs?

What could it be? 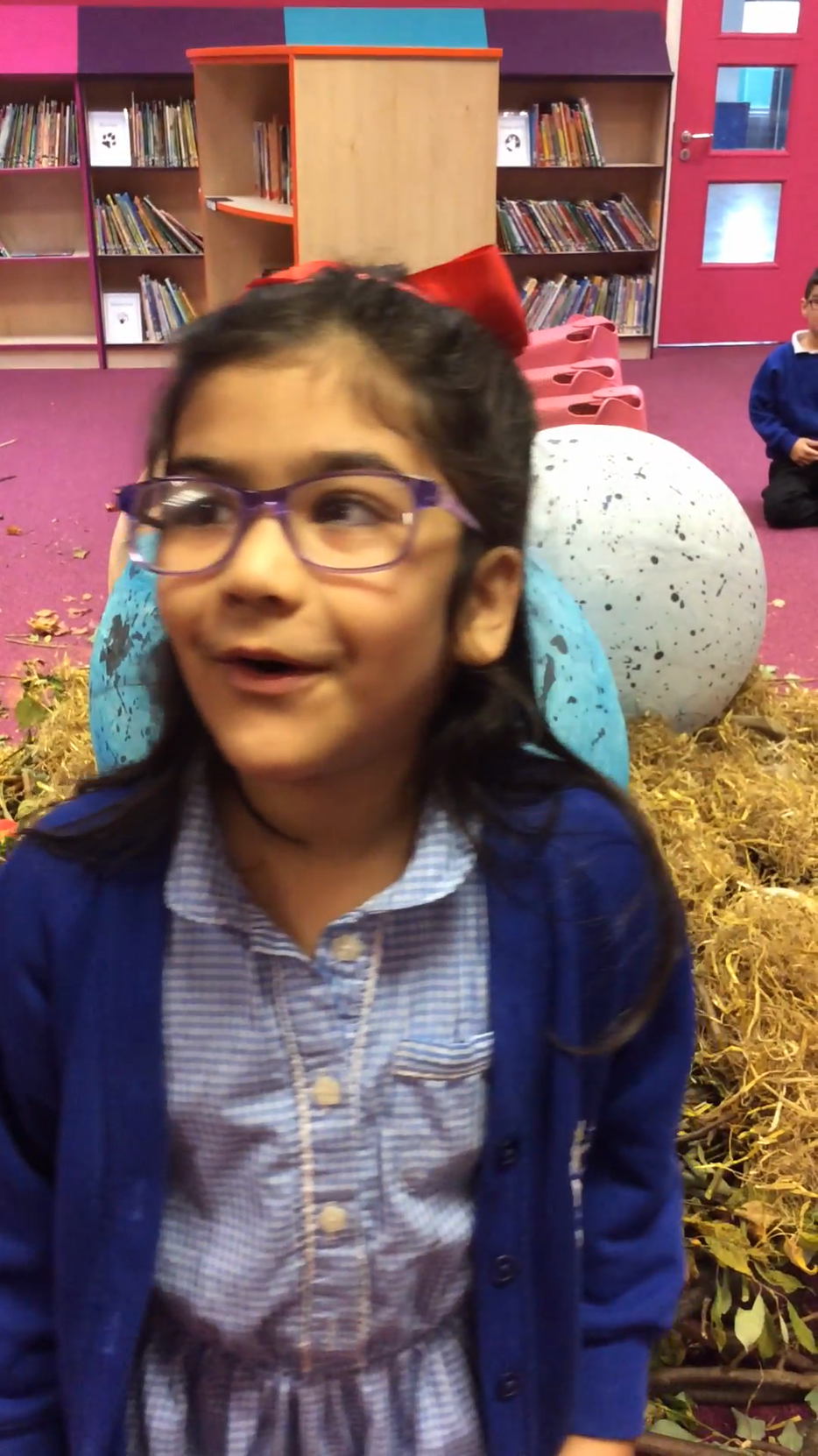 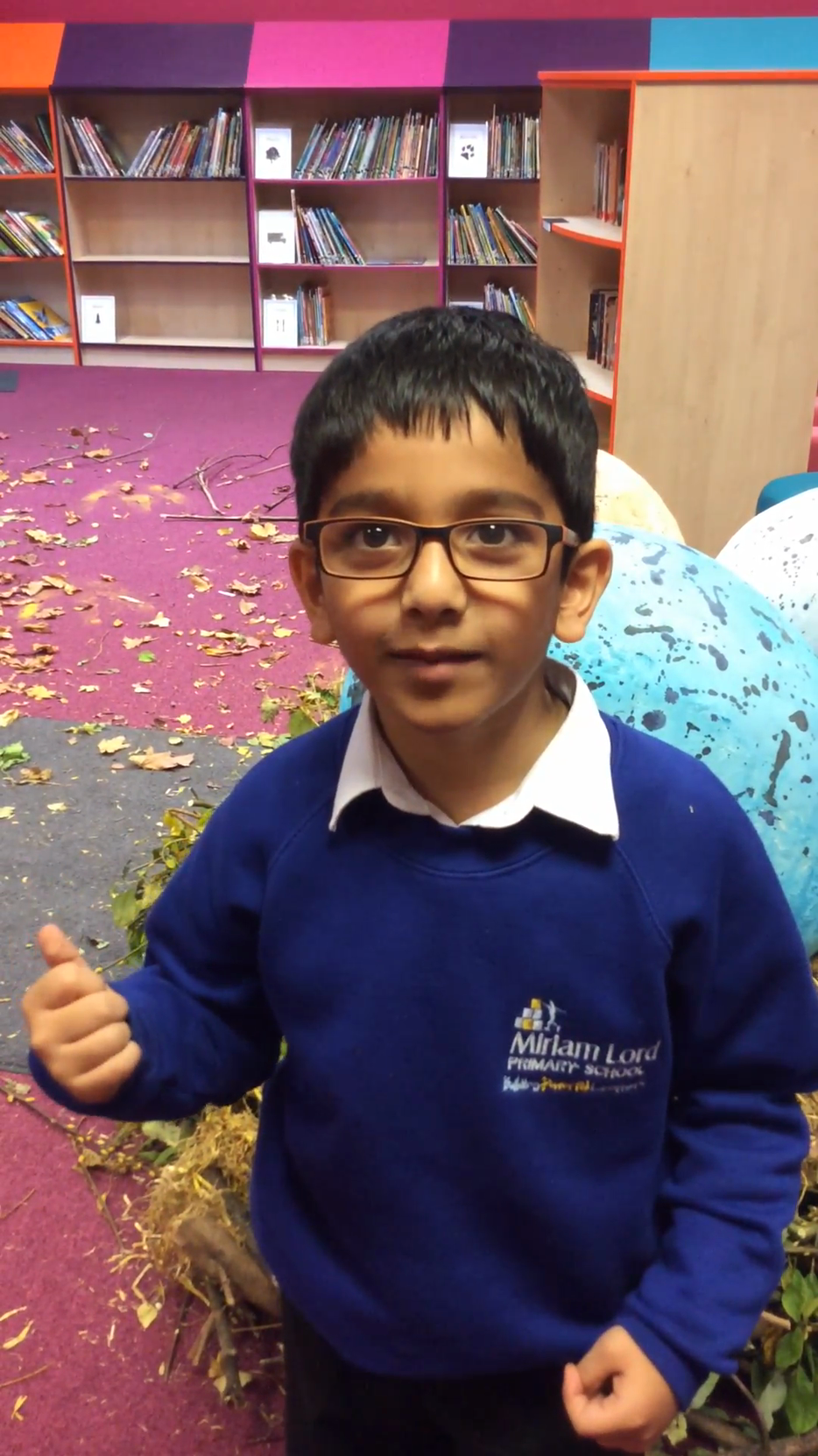 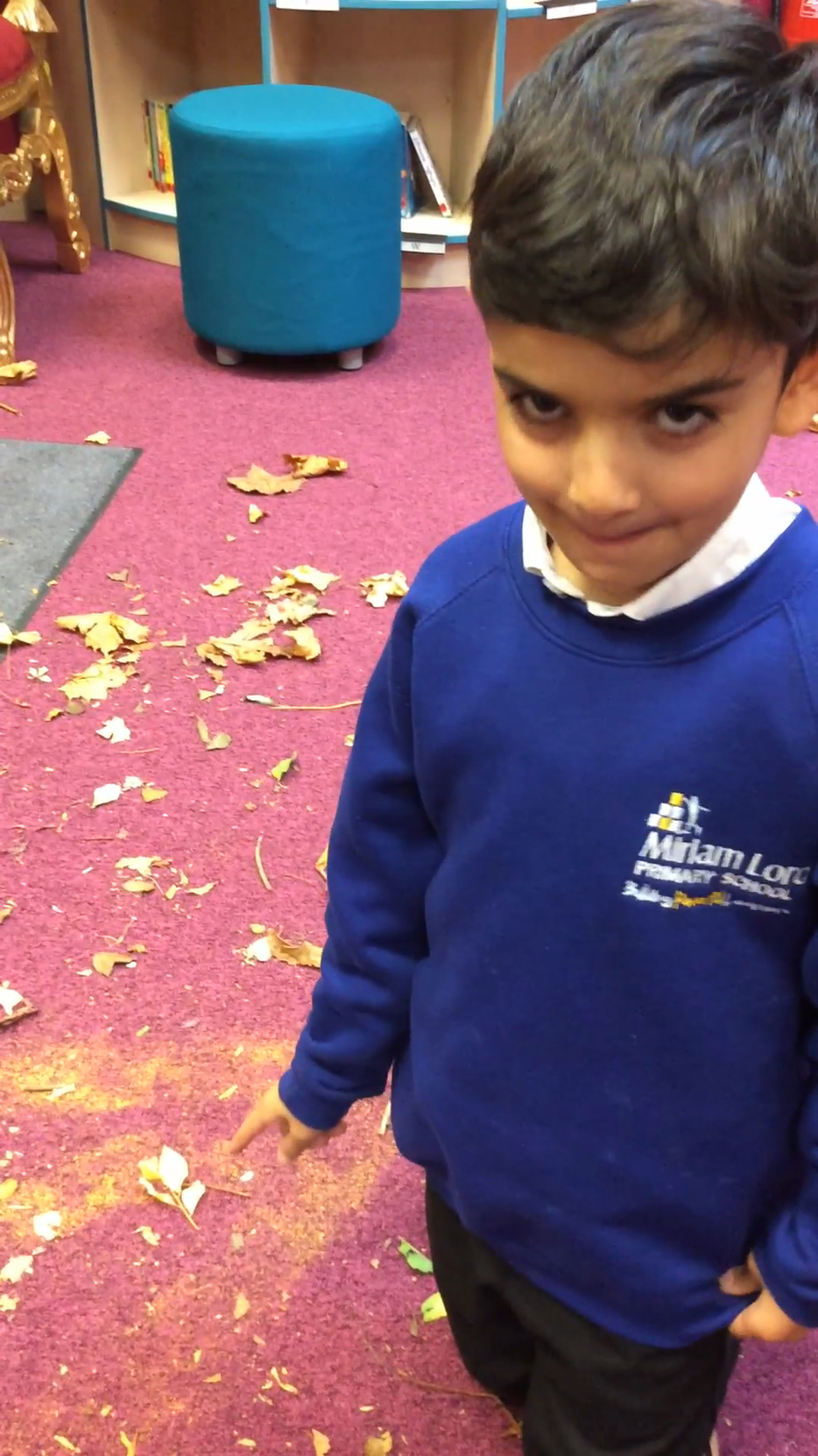 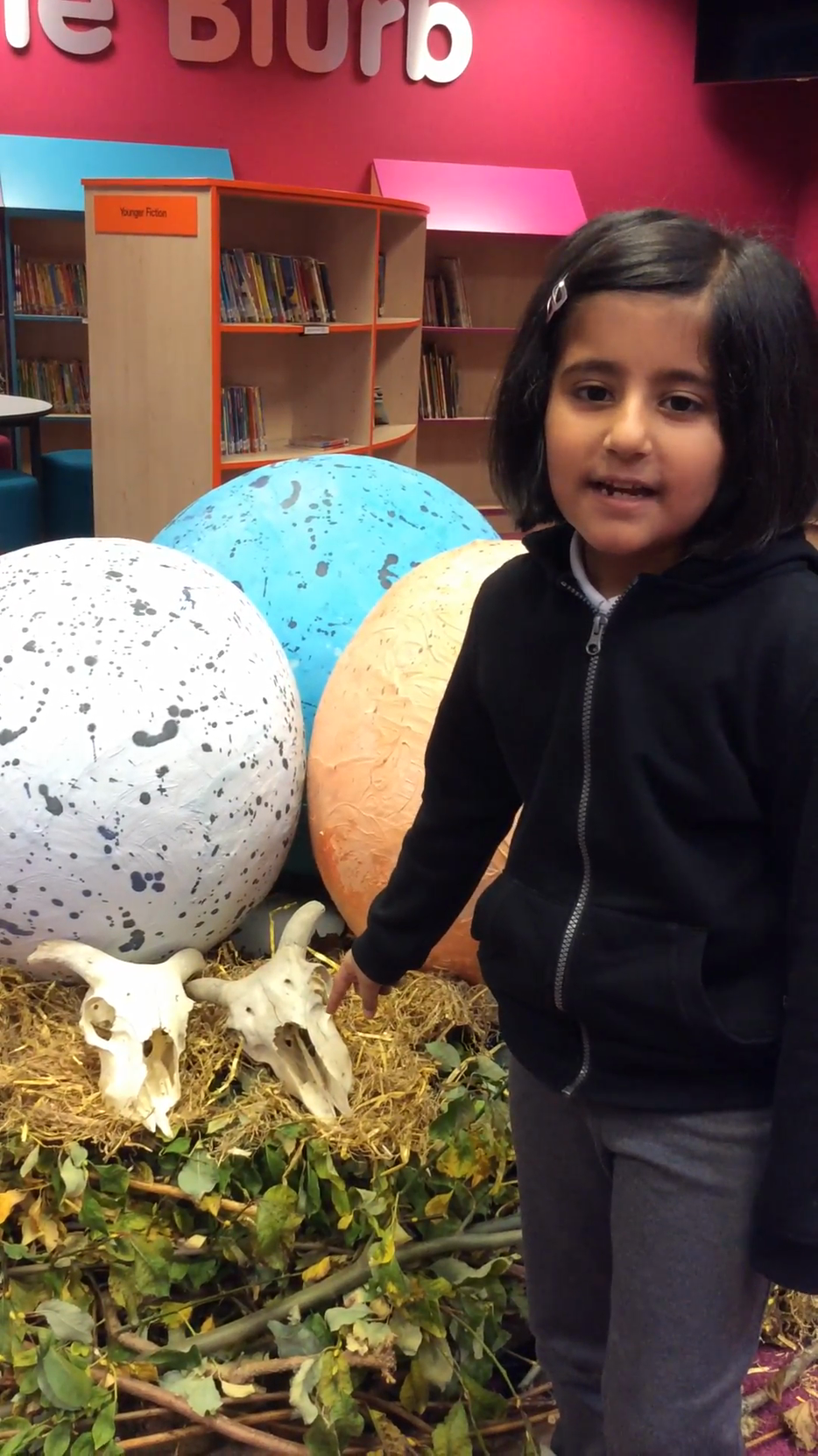 Alien Landing in the KS1 Playground

This morning (06.11.18) was very exciting! The teachers told us that something very interesting had happened overnight. We didn't believe them at first, but when we entered the playground, we couldn't believe our eyes. There was a purple, flashing alien spaceship! It had obviously crashed into Earth because there were lots of metal screws and bolts that had broken off of the small rocket. There was even green, alien slime spread over the floor so the lost alien must hurt. We could also smell the alien's planet because of the brown dust and it was horrible. Just as we were looking at the crash, the police came to investigate and they rung the police station. We really can't believe what had happened!

We wonder what has happened to the alien? What do you think?

What could it be?

This afternoon (02/11/18), Year 2 were invited to Reception and Nursery's Bonfire Bonanza and it was incredible! We watched lots and lots of fireworks and even got to hold a sparkler - we loved it! We are now even more excited to learn more about our topic on Bonfire Night.

Look at our excited faces below! 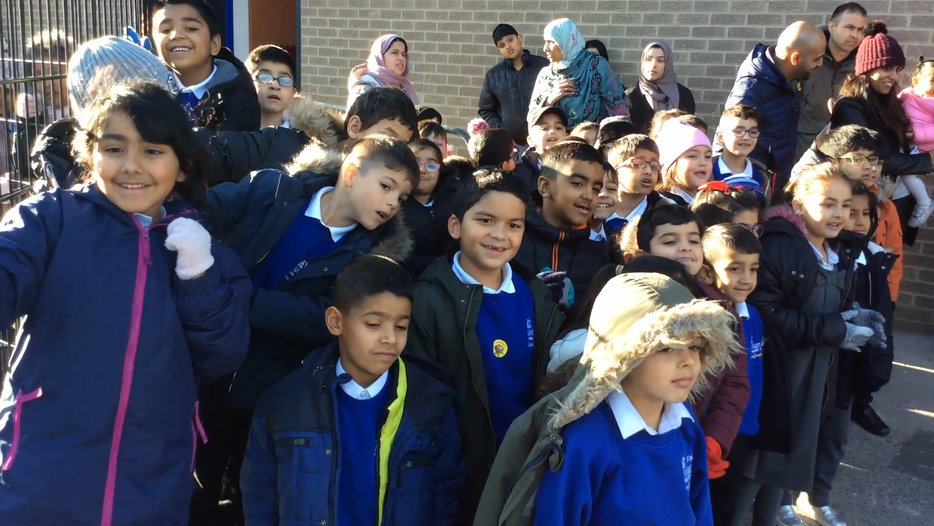 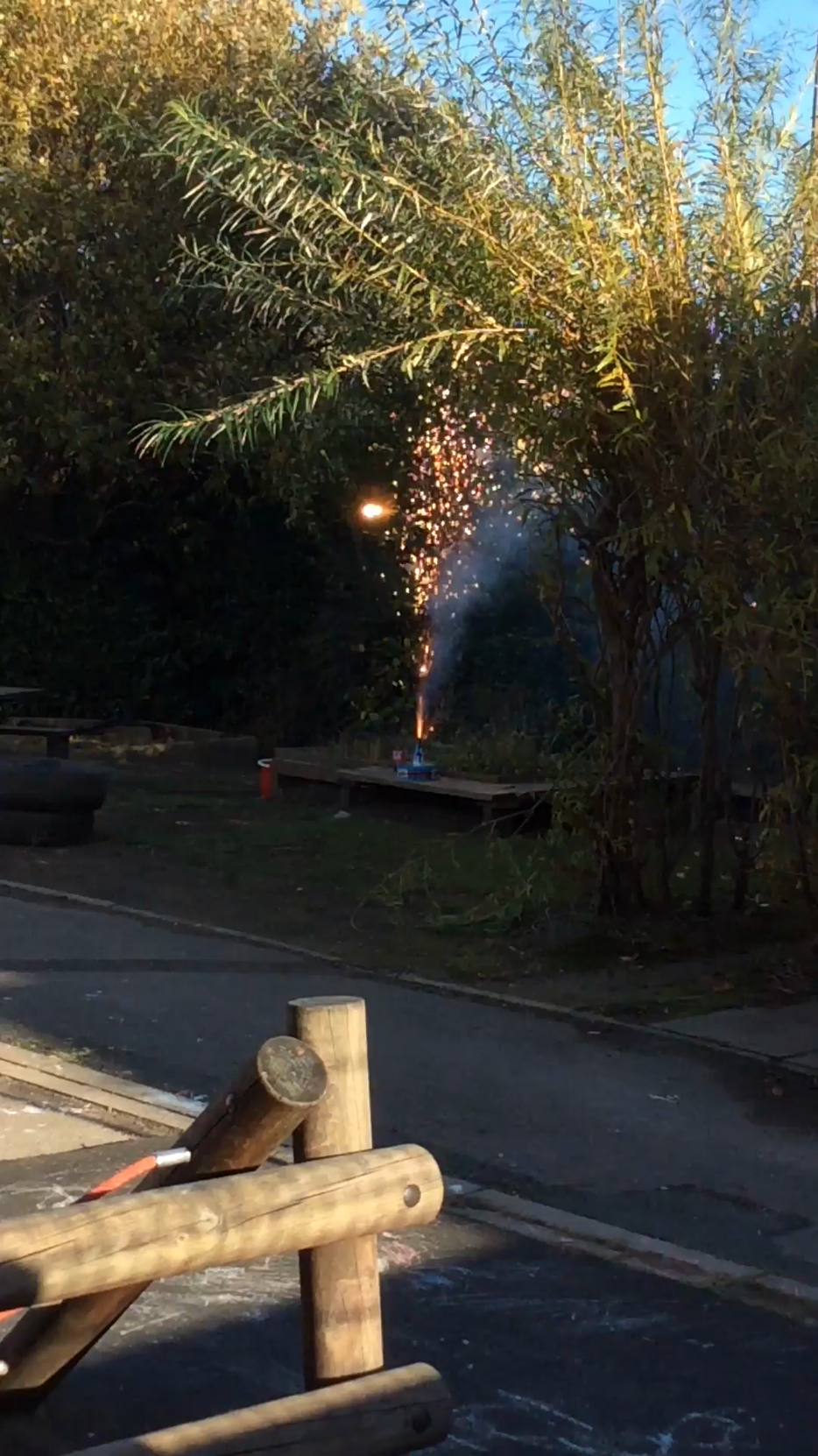 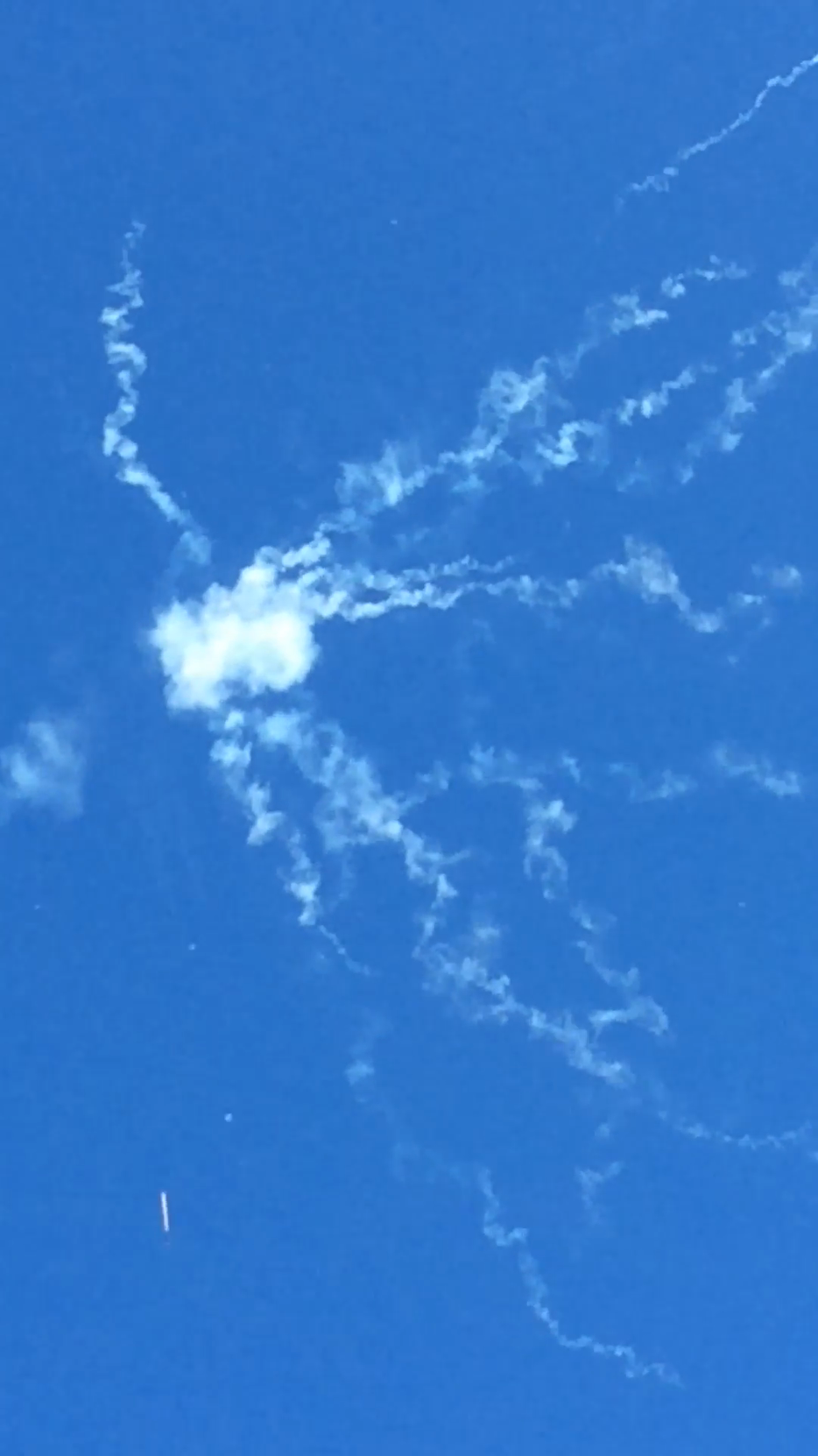 Fire in The Den

Today (30/10/18), Year 2 went to The Den to learn all about Bonfire Night. We learnt that a man called Guy Fawkes and his gang tried to blow up parliament, but they failed. So every year to celebrate the criminals getting caught we have a bonfire and on top of that fire we burn a 'guy'.  Therefore, while Year 2 were in The Den they build 'guys' using the natural materials around them and sparked fires using a flint. It was great fun!

Look at our pictures below!

Bonfire at The Den 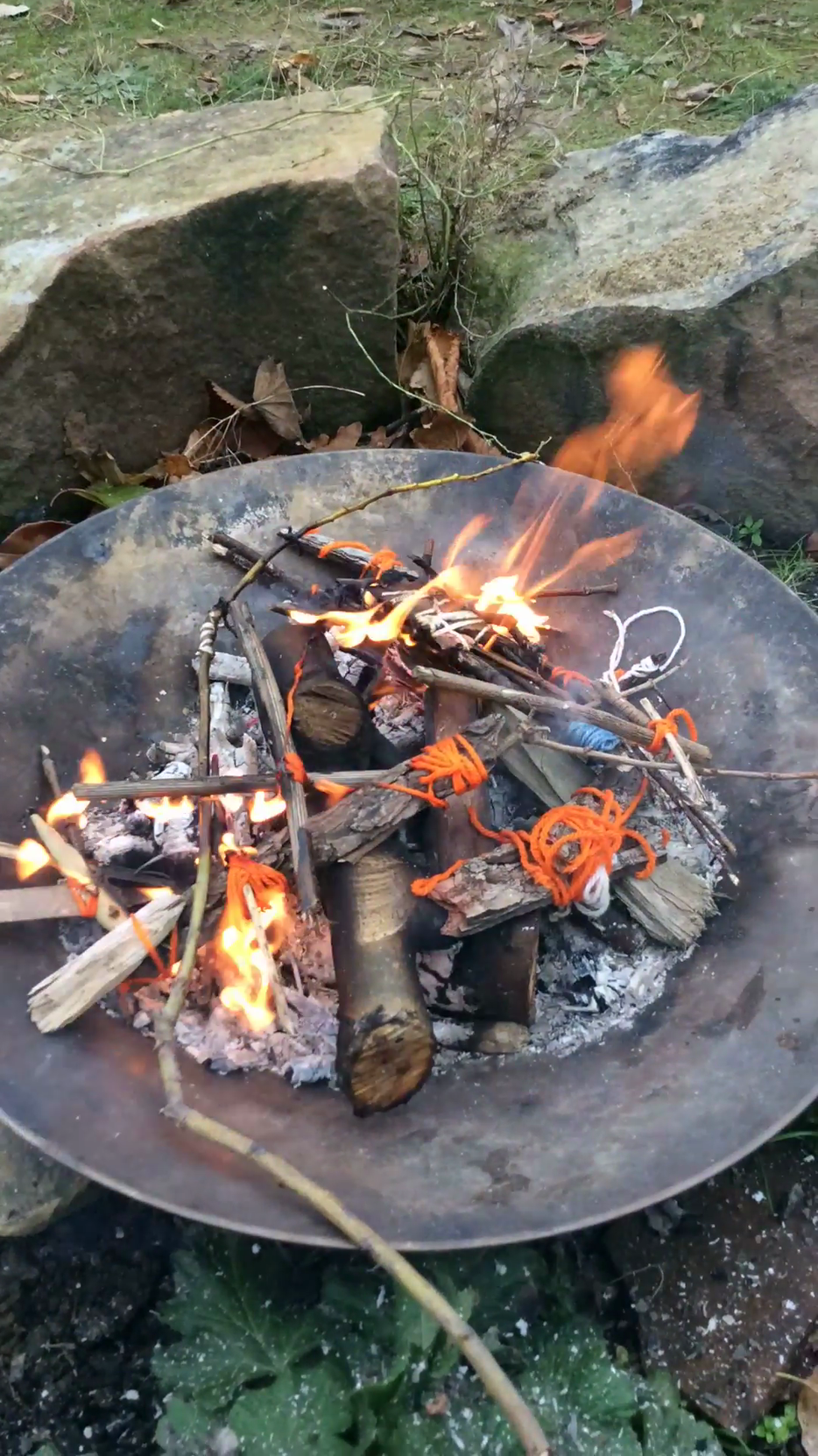 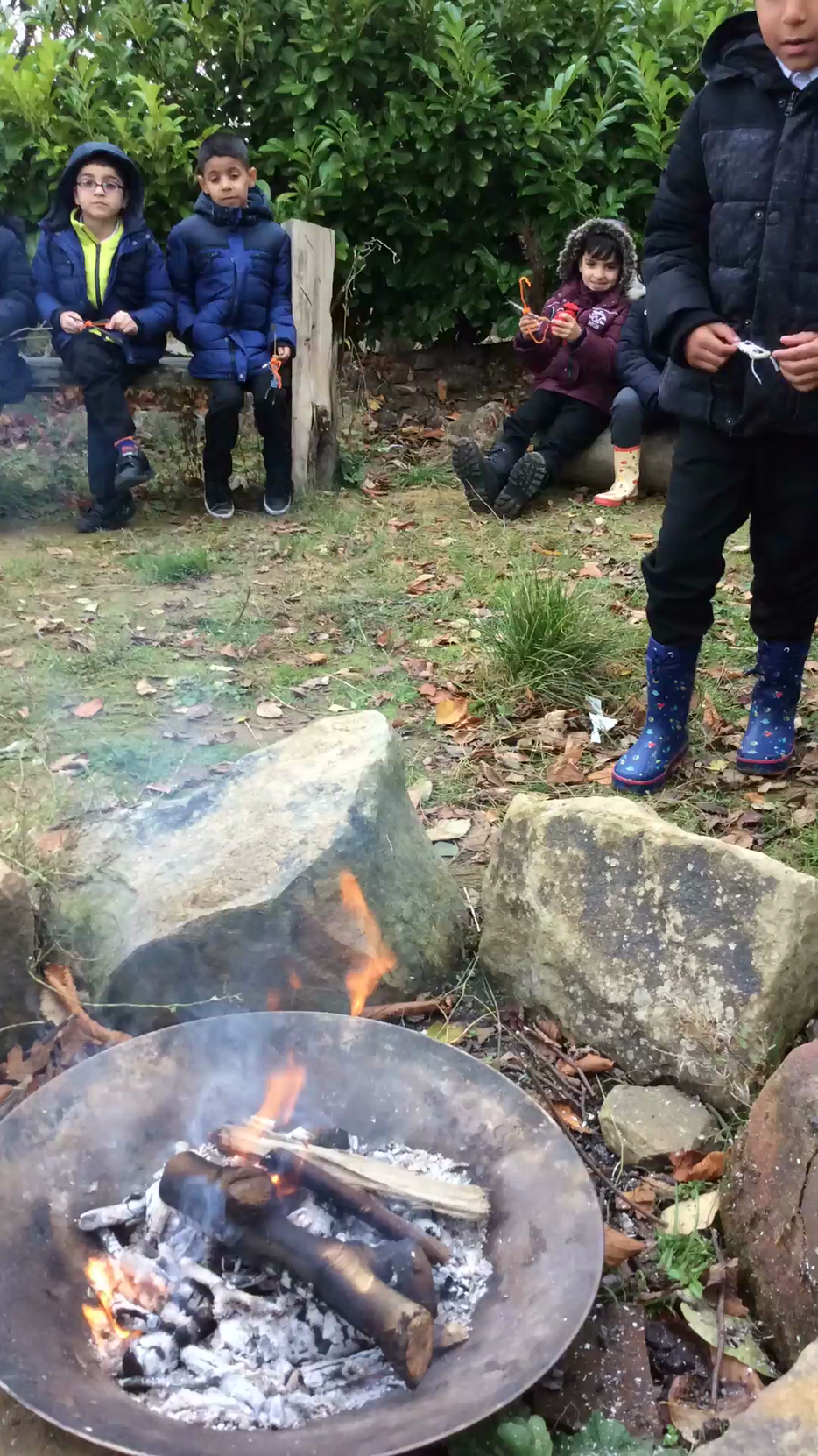 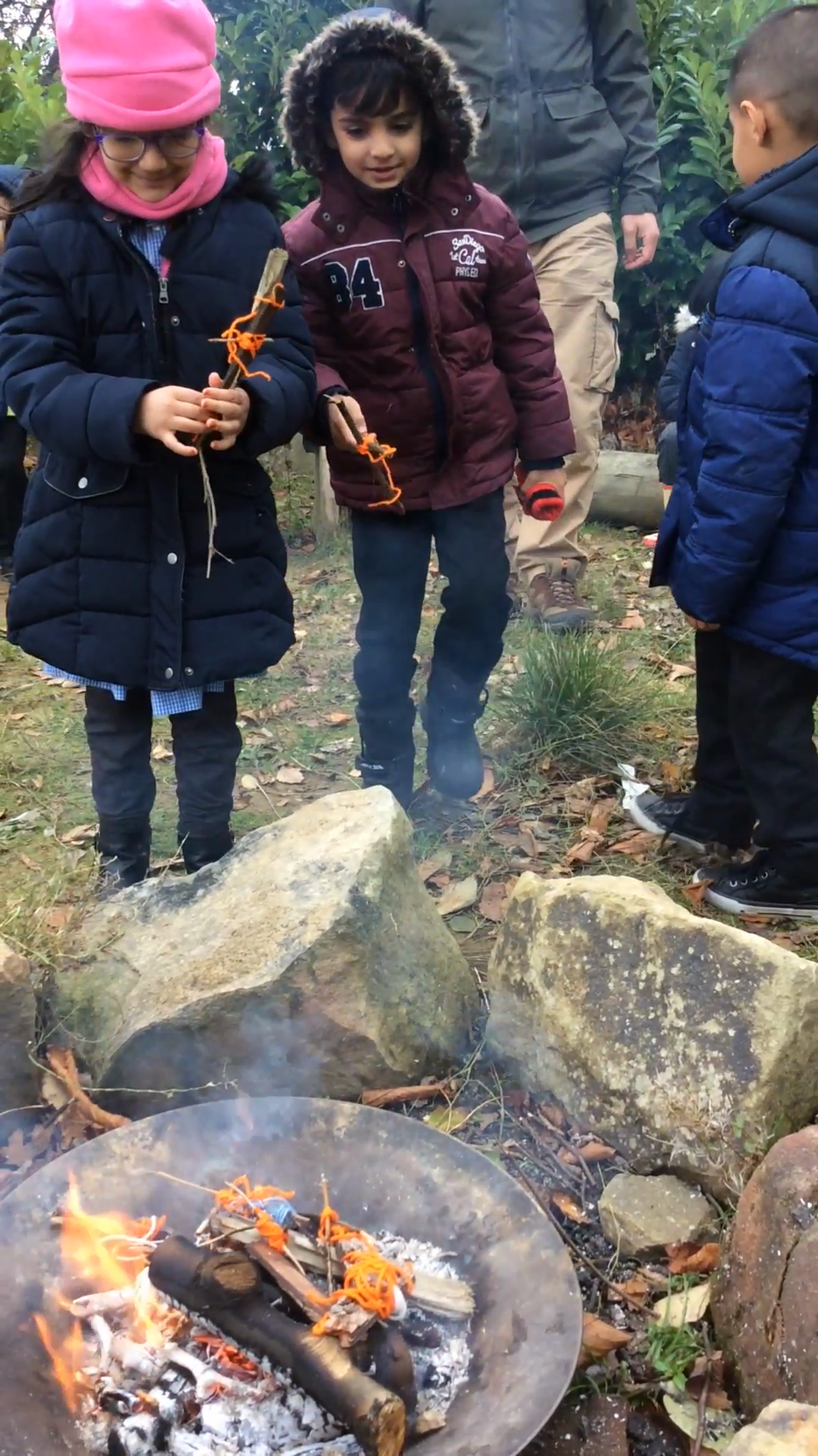 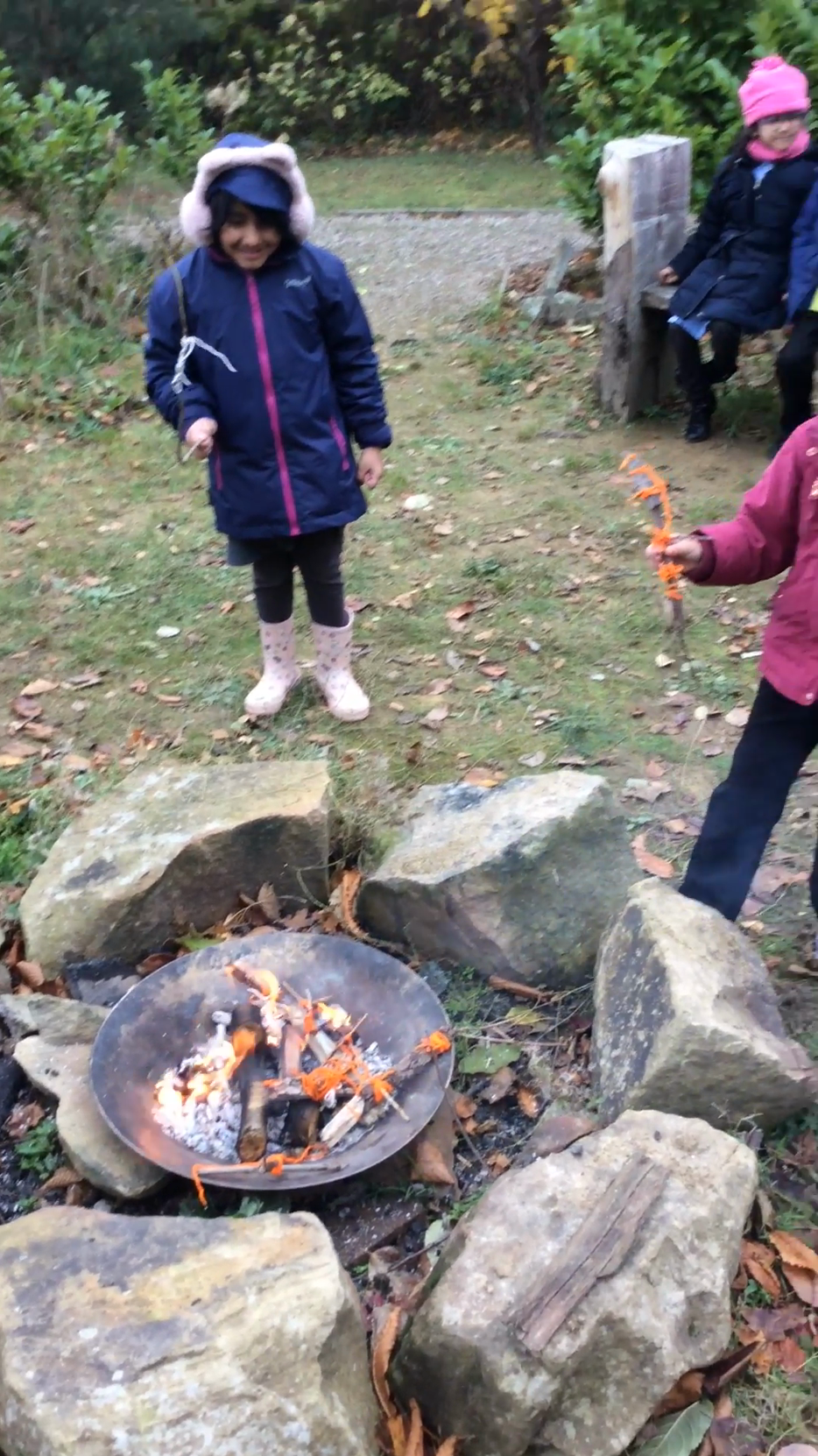 Today (18.10.18), Zara , Ibrahim and Harris from Hughes class were the first members of year 2 to achieve a pen licence. They did this by having beautiful handing with leads and hooks, finger spaces and correct sizing in all of their school. Year 2 and Miss Deciacco are VERY proud of them!

This morning (04.10.18), the KS1 teachers received a very important message from Batman! He said that he had heard some news from his friend Spiderman that the Joker was planning another attack on Manningham. He went on to say that he thought that the next target might be the bank to steal all the money and asked Year 1 and 2 to find a good look out spot where we could hide and capture the Joker. So Year 1 and 2 set straight to work and did a walk around the local area this afternoon. We considered: the school car park, the church, Manningham library, the garage, the sports centre and the KS2 playground. As we walked around we discussed if they were human or physical features and if they were a good lookout point.

Listen is Ismail below to see what we decided!

Today (02.10.18), KS1 became storytellers. We listened to Michael Rosen's Chocolate Cake and thought about why he is such a good storyteller. We decided that it was because he using his voice, actions and sound effects to make to story interesting. Next, we retold the Diary of the Fly using all the tricks that Michael Rosen did.

Have a listen and see what you think! 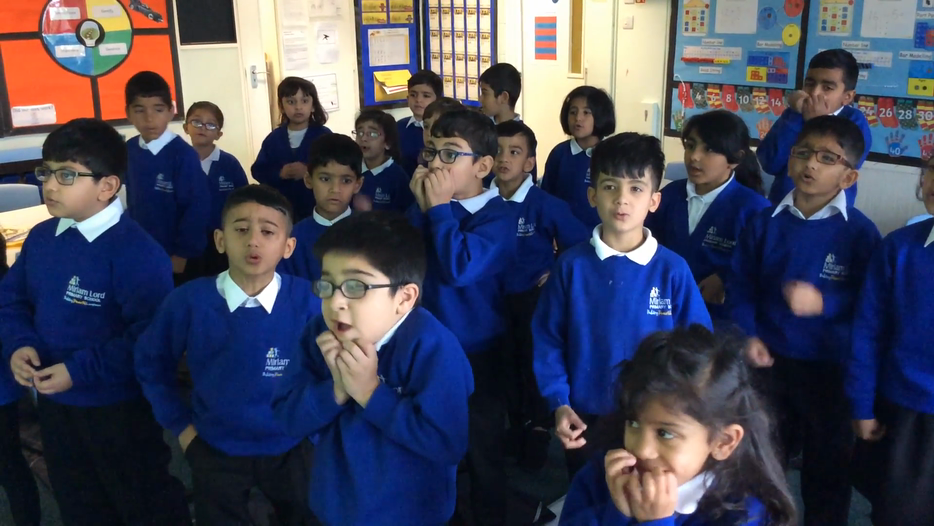 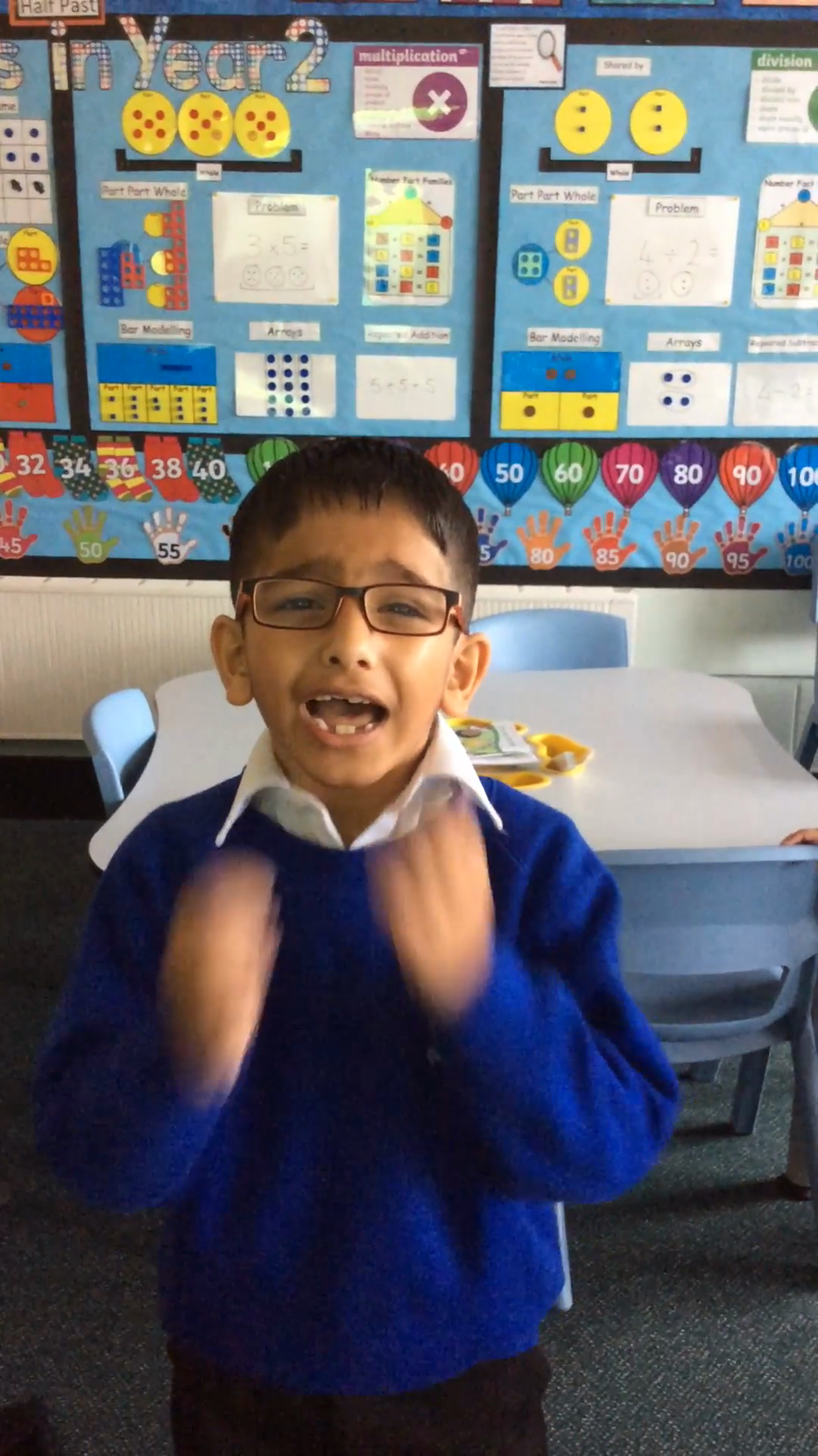 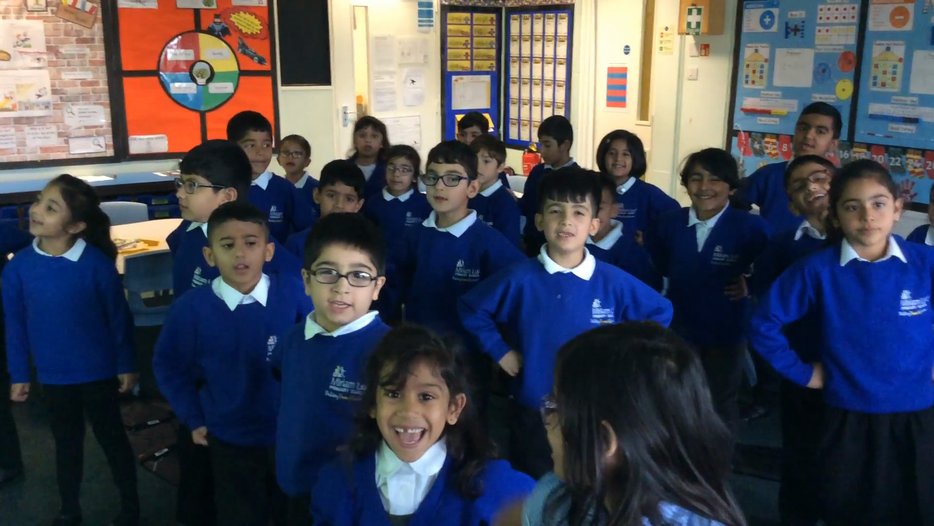 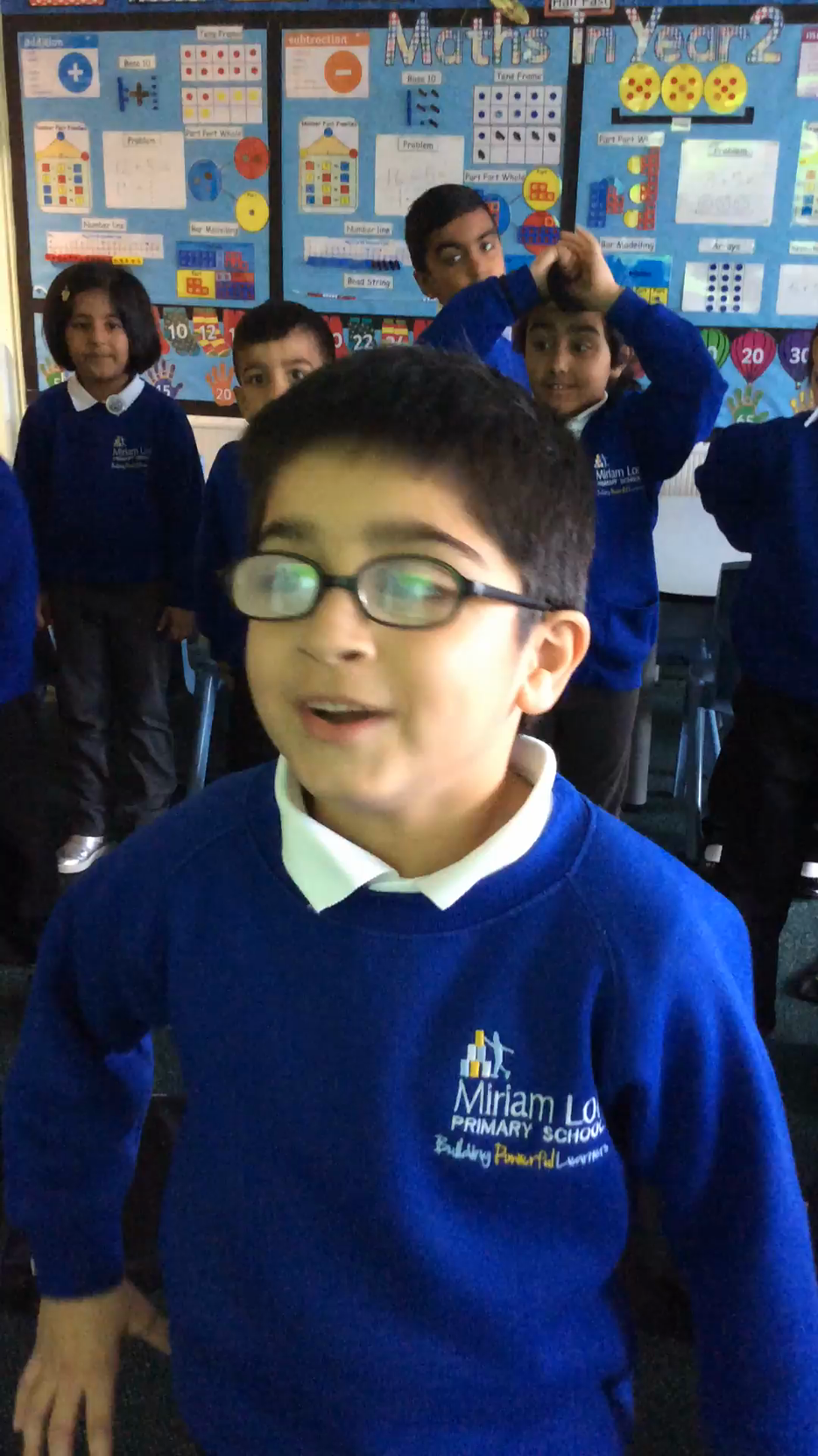 This half term (Autumn 1), KS1 are learning the names of our body parts. We've done this by singing along to Head, Shoulders, Knees and Toes. We did a great job!

Check out our Spanish below. 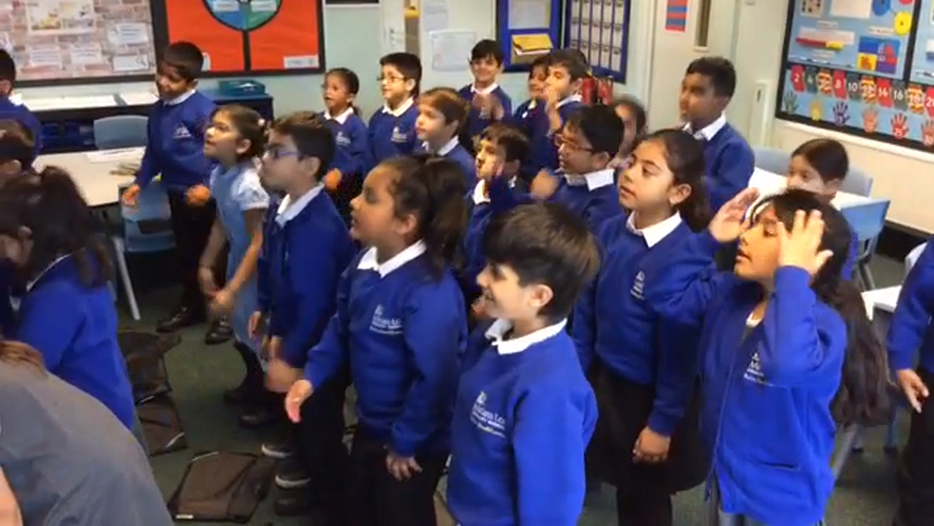 Today (12.09.18), we had a superhero day! We all came to school in our superhero costumes so the school was very safe. However, the night before something terrible had happened... a villain stole the House Cup from the trophy cabinet - oh no! The police asked all of Year 1 and 2 to investigate for them. We became investigators to explore, notice and make links to the clues and evidence that had been left. Throughout the day, we also printed a Batman logo and make a Numicon city skyline. It was great fun! At the end of the day, we reasoned and came to the conclusion that the thief was the Joker, but don't worry we informed the police and we now have the House Cup back!

Check out the pictures below to see our fun!

KS1 here to save the day!